Norwich to present “The Tree of Life” Shadowbox 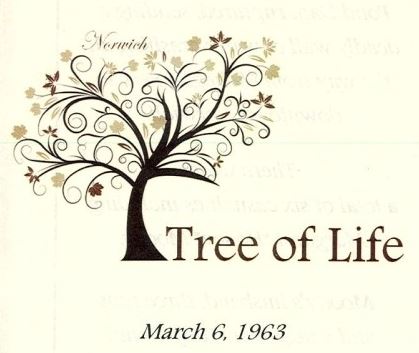 New England Glass Co donated to the Norwich Historical Society in honor of the Lifesaving Tree along with Norwich Lumber Co. and John Kelly with Norwich Tech’s Carpentry Dept. Two New England Glass Co employees attended the event at City Hall on June 26, 2014 at 2:30PM. It was a special community event in which we are proud to be a part of.  See the article below to learn more about Norwich’s Lifesaving Tree.

Norwich — A nondescript sugar maple tree on Franklin Street was recognized Thursday for the lifesaving role it played on March 6, 1963, when it provided sudden refuge to three young children, their father and a family friend fleeing the deadly raging flood waters that ravaged downtown Norwich.

About 25 people gathered on the third floor of City Hall outside Mayor Deberey Hinchey’s office to see a different sort of key presentation, as theNorwichHistorical Society turned over the key to a new glass-front wooden display case containing a limb of the tree, photos of the flood and a CD containing a poem and a song that pay tribute to “Norwich’s Lifesaving Tree.”

On that March 6 day, Tony Orsini, Thomas Moody Sr. and his wife, Margaret “Honey” Moody, grabbed the Moody family’s three young boys, Thomas Jr., Shawn and Jim, jumped into the car and tried to outrun the flood from their vulnerable Lake Street home. They didn’t make it beyond a sharp curve toward Franklin Street when the rushing water flipped the car.

Orsini and the two adults raised the children onto a shed roof and into a V in the tree before the flood waters carried Honey Moody away to her death.

Callinan sang the song for some 25 people who attended Thursday’s ceremony, including Orsini, Shawn Moody and Jim Moody.

And at 10 a.m. on July 26, the historical society will place a commemorative plaque near the tree, which is located on private property.

Member and project coordinator Roberta Vincent — who wrote the poem included on the CD placed in the display case — said the plaque is important because the tree is located on private property. The city has no control over whether it gets torn down at some future time.

Shawn Moody, who was j ust 3 months old during the flood, and Jim Moody, who was 3 at the time, both said they were pleased to see the tree recognized, but added that Orsini will always be the family’s hero and friend for his deeds that day.

‘We would stop and look at it’

The two men have no memories of the flood but heard stories growing up about the disaster that took their mother’s and five others’ lives. Their older brother Thomas Moody Jr. researched the flood and his family’s narrow escape, along with the harrowing experiences of others caught in the flood, and published “A Swift and Deadly Maelstrom” in 2013. A copy of the book was placed in the display case.

“As we were growing up, as we drove past it, we would stop and look,” Jim Moody, now of Canterbury, said.

“I stopped there today,” Shawn Moody of Colchester said.